Dictionaries define the heel as: ‘Rise that applies to the back end of the sole of the shoes, on which it rests’.

But this definition does not explain the fame that heels (especially high) have managed to win. For men they are synonymous with beauty, sensuality and elegance.

But for the fairer sex, on the other hand, wearing heels is a real way of being and expressing all one’s femininity.

Marilyn Monroe consecrates its success towards the end of the 1950s: “I don’t know who invented high heels, but women owe him a lot” 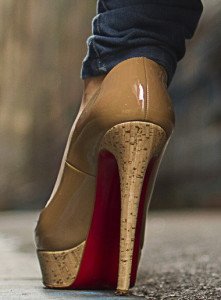 How heels were born.

The invention of high heels as fashion is attributable to Caterina de’ Medici. Since she was very low and would be the bride of the Duke of Orleans, a vigorous, tall and powerful man, she put to work all the tailors and stylists of her court to try to resolve the embarrassing situation: it is evident that she did not want to disfigure alongside what would soon become the king of the whole of France.

And so it was that , during a reception party, he showed up wearing a pair of shoes with seven centimeters high heels. Thanks to this ruse, her physique seemed slender and imposing.

The brilliant intuition was a huge success and, from that moment on, they were forever associated with women’s clothing. If this had really been the case, then, shortly, we could celebrate the 500th century of their creation.

But history is always full of contradictions and searching for the truth can become a really difficult undertaking.

There is a book, Shoes: An Illustrated History,written by Rebecca Shawcross, which in her great study on the history of shoes, at one point also pauses to talk about the heel: according to her reconstruction, the first heeled shoes would be in Italy.

They were called chopines and were very high mules worn in the fifteenth century by prostitutes in Venice. They had a triple function: they elevated compared to rivals, attracted the attention of customers and gave a sensual bearing.

And so Caterina de Medici should step aside and give up the credit of having arrived first.

But, to be honest, there are some interesting thesis that heels were already used in ancient Egypt and even by knights of Mongolia.

It is easy to imagine that in those days wearing a shoe with heels had no aesthetic purpose: in the first case, in fact, it is thought that heels were used in butchershops, to avoid getting their feet dirty with blood; in the second case, however, the heels were worn by the riders in order to be able to hold the brackets more firmly.

Instead, continuing with Rebecca Shawcross’s thesis, the first high-heeled wearer would be Queen Elizabeth I thin 1500s. Then, due to the French and American revolutions and the consequent contempt for aristocratic environments, in the early nineteenth century the heel made its demise.

But towards the thin the same century it was again appreciated and worn. It was only after thin end of the Second World War that it became a real object of worship, consecrated by Christian Dior, who in those years revived the style of French.

Clogs e mules… the mules fashion returns to the feet

Why do women with heeled mules like it most?

- And if after purchasing I realize that the mules aren't good?? consulta la politica dei resi e rimborsi di amazon

Help us spread the zoccolimania!

If you want to help us promote our site and our ideas, copy and paste the following link on your site, blog, facebook page, twitter etc:
https://www.zoccolimania.it

Do you want to be a protagonist in the zoccolimania project? would you like to appear in one of the blog posts and in its social channels? Send us your photos! MORE INFORMATION
×